Strike The Father Dead is out in new editions in the UK and the USA, in paperback and Kindle editions USA : via Valancourt Books – illustration below is the original cover which has been recreated for the Valancourt Edition. UK edition from Foruli Press, with new cover artwork from Andy Vella (second picture)

Jeremy Coleman is the son of a Classics Professor, and a constant disappointment to the self-disciplined and austere old man, who thoroughly disapproves of his love of playing jazz piano. After some episodes of teenage rebellion set father and son at odds, Jeremy disappears into the dives of wartime London to play jazz for a living in seedy nightclubs, leaving his father and his loving but quavery aunt Eleanor to face the disapproval and malicious curiosity of 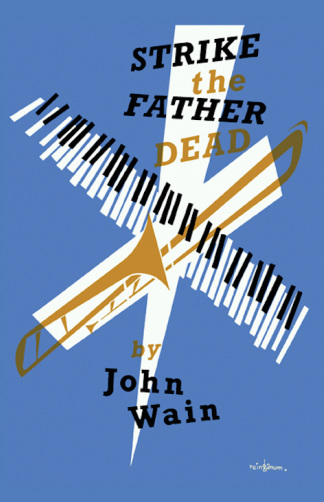 Evading wartime conscription, the young man soon encounters the other denizens of this strange twilight world of draft-dodgers and itinerant musicians. Jeremy then meets a genuine Black American jazz man, slide trombonist Percy Brett, and together they move to the shabby-chic surroundings of postwar Paris to form a band. When success beckons, however, Jeremy finds that Percy has brought his own issues with him from his upbringing in the American South.

Meanwhile Professor Coleman is stricken with grief and remorse,  his own feelings, long suppressed, from his time as a junior officer on the Western Front coming back to reproach him. The two strands of the story come together finally in 1950’s London, where a racial attack on Jeremy and Percy brings father and son together in an unforeseen way… John Wain was a lifelong fan of jazz, growing up with the thirties and forties jazzmen like Jelly Roll Morton, Fats Waller, Stephane Grapelli, Bill Coleman and the gipsy guitarist Django Reinhardt. This love and knowledge of what is now called ‘trad’ jazz permeates Strike The Father Dead, although ultimately the book’s theme is love and tolerance transcendent. The novel is given to three narrators, Jeremy, his father and his aunt Eleanor, and the three perspectives give it a fascinating multiple vision of youth and age and vulnerability. It takes a violent attack on Jeremy and Percy to bring father and son together, yet in a strange way good comes out of the evil:

[Jeremy is telling the story]
To see you so hurt, makes one feel – well, rather abashed [says Professor Coleman to Percy, seeing him in hospital after the hate attack].

So that was it. The old man, ashamed, was trying to apologize to Percy on behalf of England and the English. Percy shrugged. ‘It happens,’ he said, spreading out his huge hands.

At the end of the book, in one of its best scenes, Percy and Jeremy’s band are back playing jazz gigs; but now a new  taste has overtaken the popular music scene, Rock n Roll. Their understated jazz band is slow-handclapped off the stage at a local dancehall by kids in thrall to Rockin’ Rod Tempest and his group, and Percy and Jeremy realize that their days of making a living this way might be coming to an end. This final act, as well as giving John Wain a chance to take a broadside at what he thought of as an utterly  debased musical form, gives the two a richer understanding of keeping the faith in life, the real reason to keep creating …. well, art.

You’re pretty cool, I said, sipping my pint. Don’t you realize we’ve just had the bird?

That affects the money side of things, said Percy. Can’t see no reason for it to affect the music side. We’ll just get jobs in the Post Office or something and play jazz in our spare time, if we have to.

We sneaked back into the empty dancehall, now closed for the night, and went up on the stage, lit only by moonlight from one of the high windows. I sat at the piano and lifted the lid. Percy opened the lid of his slide trombone case.

He was right. What was the difference? You live by doing the things you have to do.

Percy lifted his horn to his lips, and we started.